This blog will expose a few myths and facts regarding decreasing water levels on the Great Lakes in the fall. 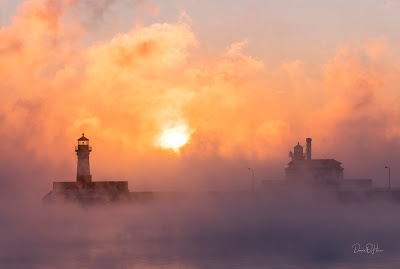 Fact: This is an assumption that doesn’t take into account long versus short term water levels. The Great Lakes are very dynamic alternating between long periods of high and low water levels in addition to going through phases of seasonal variability. Both the long-term and short-term changes are based on the current climate regime and even weather patterns that occur on the other side of the globe. Below is a graph that portrays surface water elevation data for the Lake Michigan-Huron basin between 1918 and 2020. As you can see the lakes fluctuate between below average and above-average water levels. The current trend, starting around 2015, has been above average water levels. 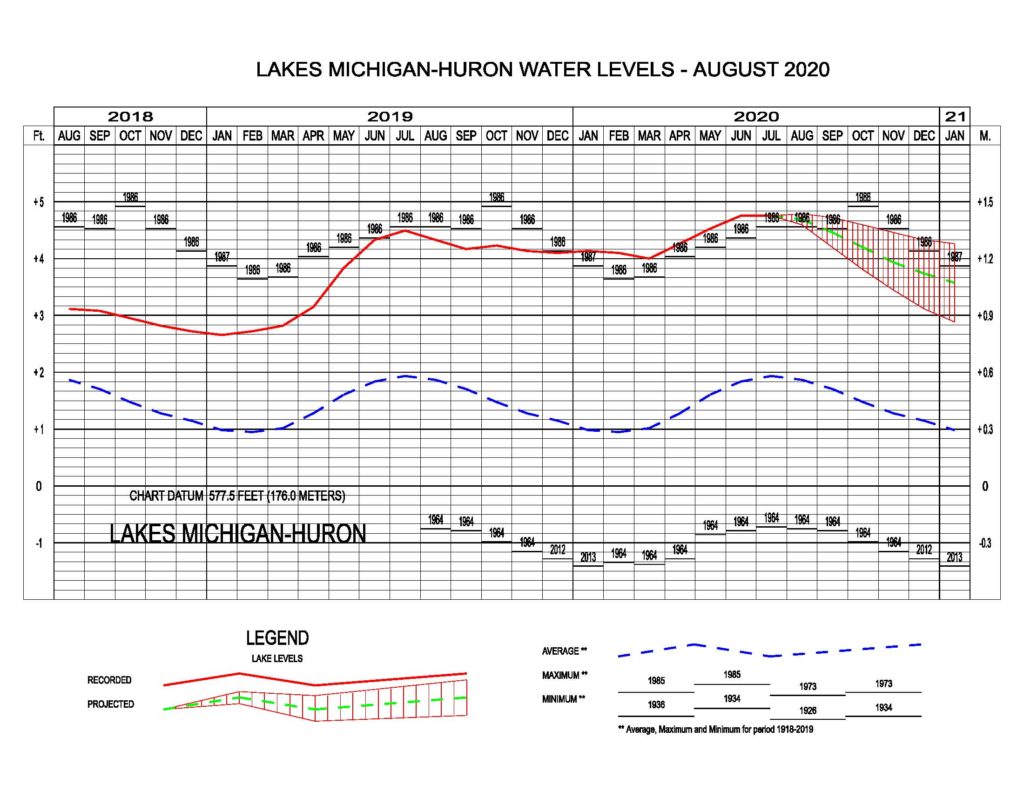 Just as Lake Michigan-Huron has risen to record highs over a period of many years, it will take multiple years for water levels to return to near average levels. Currently, Lake Michigan-Huron is at about three feet above the long-term average water level. The largest one-year drop in water levels was 2.3 feet from October 1986 to October 1987. In the last 100 years, just three times have water levels dropped three feet or more within two years – 1929-1931, 1986-1988, and 1999-2000 (when comparing similar months between years to account for seasonal effects). So even under ideal conditions for water levels to decrease, we should expect above average water levels for at least the next two years, if not longer.

Myth 2: Because of hot summer temperatures, evaporation should cause lake levels to decrease.

Fact: As we learned about at the beginning of the blog Lake water levels are higher in the summer and lower in the winter. If hot summers caused evaporation this trend would be the opposite. Fall and winter are actually when most of the evaporation happens and is the time of year we typically see water levels decrease. This happens as the air temperature starts to cool down and dry out (more on that later). It is difficult to tell directly how much water is evaporating form the Great Lakes because of the limitation in collecting this data. Instead, we have to rely on other direct observations from the Net Basin Supply (see myth 2) in order to infer how much water is evaporating.

“Evaporation rates are affected by atmospheric variables, such as humidity, [temperature, and] wind speed” (Gronewold, 2015). There are 3 drivers for evaporation to happen:

These conditions are met in the fall and winter months. During the fall, the air temperature cools, relative humidity decreases, and the wind picks up. During the winter, increased evaporation also happens when there is less seasonal ice cover on lakes. In fact, so much evaporation can happen in the fall/winter months, up to 0.6 inches per day, it is relatively equivalent to 20 times the flow rate of Niagara Falls!

Myth 3: Precipitation is the main factor in water level fluctuation.

Fact: Precipitation is only one of many factors when it comes to lake levels. Net Basin Supply (NBS) is the main component to determine water levels. There are three components: “overlake precipitation, lake evaporation, and drainage basin runoff—along with diversions in and out of the basin and channel flow between lakes” (Notaro, et.al., 2015). Precipitation is higher in the spring and summer contributing to rising water levels and lower in the fall and winter which allows evaporation and runoff to drive their fall.

The NBS is a compilation of the inputs and outputs of water in each of the Great Lakes. It involves the precipitation (P) and runoff (R) entering the Lake minus evaporation (E) and the amount of water leaving the Lake. This measure is an important part of understanding the water balance, essentially the rising and falling of the water levels. [links to past water balance blogs]. The graph below shows the average contributions to the NBS for the Lake Michigan-Huron basin between 1948 and 2008. On an average year NBS tends to be higher in the summer months when precipitation is greater than evaporation and lower in the winter when evaporation is higher than precipitation. 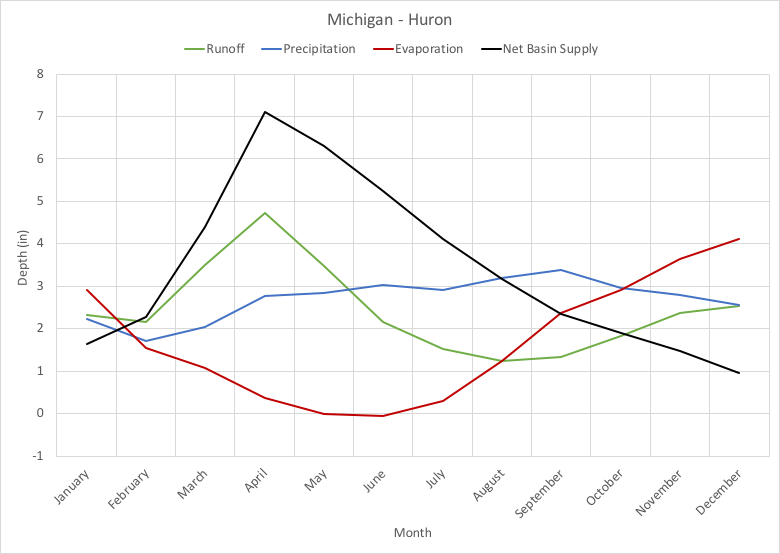 Myth 4: Humans have control over the regulation of the Great Lakes water levels.

Another myth is that humans can possibly engineer our way out of high water levels through man-made diversions. Take the Chicago river for instance. It used to flow into Lake Michigan. Back in 1900, the Chicago Sanitary and Ship Canal was constructed to make the water flow backwards towards the Mississippi to prevent sewage from entering the lake. Today, this engineering feat diverts about 3200 cubic feet per second of water out of Lake Michigan, an amount dictated by a 1967 U.S. Supreme Court decree (Quinn, 1999). Over the course of an entire year, that is a massive 750 billion gallons of water flowing out of Lake Michigan through the Chicago River. However, that amounts to only about an inch of decrease in lake level. When considering the Great Lakes’ highs and lows, it becomes clear that nature’s ability to fluctuate water levels remains far larger than anything humans are able to do before even considering cost and feasibility of such an effor

Initially, this was thought to be the case during the period of record-breaking low water levels, circa 2000 – 2015. A common misconception is that increased temperatures and higher evapotranspiration rates were leading to a chronic water loss. Older Global Climate Models (GCM) or Regional Climate Models (RCM) based their predictions mostly on the atmospheric temperature to gauge the amount of evapotranspiration across the Lakes. This leads to an overestimation of evapotranspiration measurements and therefore an inaccurate prediction of future, lower water level trends.

Since this realization, the latest science of lake levels under a changing climate now suggests that there are a few trends we can expect in the future. Extreme weather events are expected to increase. These may be characterized by increased amounts and intensity of precipitation which may cause flooding, as well as periods of extended droughts causing low lake levels. A study by Music et al. (2015) “suggests an amplification of the NBS annual cycle and an intensification of the annual NBS minima in future climate.” This means that overall the amount of water entering and leaving the Great Lakes is expected to be similar in quantity to what we’ve seen historically. However there may will be greater fluctuations between periods of low and high water levels. Climate model simulations done by Notaro, et. al. (2015) also indicate that there will be significant changes in precipitation, runoff, and evaporation in the seasonal cycles by the mid and late 21st century. In addition, there is evidence that weather changes in the arctic may “influence Great Lakes ice cover, Lake effect snow events, seasonal freeze-thaw dynamics, as well as lake levels” (Gronewold, 2019), which would then affect evaporation patterns currently seen. So while there is no longer a clear scientific consensus about a lake levels entering a new regime of consistently low (or high) lake levels under a changing climate, there is an expectation that we may see higher highs, lower lows, and more drastic changes between these extremes.