The water level of Lake Michigan as of April 26th, 2019 is at an elevation of 580.87 feet above sea level (from the International Great Lakes Datum). This puts Lake Michigan at 26 inches above the long-term average water level for the month of April, calculated from water levels measured from 1918 to 2018. From a historic perspective, Lake Michigan is at its highest April water level since 1997 but is still 7 inches below the record high for April set in 1986.

Compared to this year’s lowest water levels experienced in January, Lake Michigan is up 9 inches. Six-month water level forecasts from the US Army Corps of Engineers project Lake Michigan to remain above the long-term average levels into the fall (see the most current forecast here). These six-month forecasts are compiled considering estimates for future precipitation and runoff into the lake, evaporation from the lake, and outflows from the lake.

Lake levels are determined by the lake’s water budget (Figure 1) which is similar to a checking account – the water budget is balanced by adding all of the inputs to the lake (runoff, precipitation, and inflow from upstream water bodies) and subtracting all of the outputs (evaporation, outflow to a downstream water body, and diversions). In general, water levels typically rise in the spring due to increased precipitation and runoff entering the lake and drop in the fall as a result of weather conditions that increase evaporation. The Great Lakes region as a whole experienced above average precipitation in the Winter of 2019, which was a main driver in Lake Michigan water levels inching closer to record levels. Because Lake Michigan’s water levels stayed above average during the 2018-2019 winter, levels started above-average this spring as well. 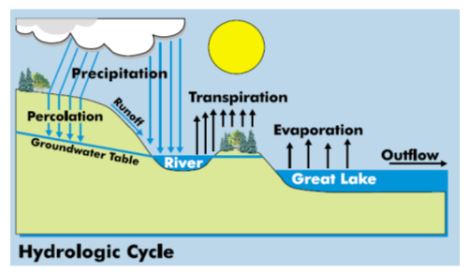 In summary, the Lake Michigan water level is still above-average and is anticipated to remain above-average at least through the fall of 2019 as precipitation and runoff into the Lake increase. While high water levels themselves don’t cause shoreline erosion, high water levels allow erosive waves to reach higher elevations on the shore where they batter shoreline infrastructure and eat away at the base of bluffs and dunes. Beaches are also made smaller under high water levels, as the lake inundates portions of the beach. On the other hand, high water levels can help alleviate navigation concerns for boats and ships, providing more clearance from the bottom of harbors and channels.

Many good resources exist to learn more about Great Lakes water levels. The Army Corps of Engineers publication Living with the Lakes explains what factors influence water level changes. NOAA’s Great Lakes Water Level Dashboard is a tool to explore historic and forecasted water levels. A summary of NOAA research into the recent rise in water levels that began in 2013 is available in this article.